Friday and Saturday at 8PM; Sunday at 2PM

LET'S SEND A MESSAGE.  Historic, deeply important  midterm elections are right around the corner. Iconoclastic performance artist Karen Finley headlines a stellar lineup  of artists to inspire and activate the downtown community with a "Call to Action" weekend, anchored around her latest protest piece.

Friday, October 26th | Soapbox: Speak Up, Speak Out featuring Pamela Sneed, Adrienne Truscott and a lineup of powerful women and gender non-conforming artists,
all proceeds will be donated to the ACLU.

Saturday, October 27th | Grabbing Pussy/Parts Known by Karen Finley, as a voice for the embodied rage that refuses to endure the authority and terror of bodies controlled and responding to the anguish of forced family separations at borders,
all proceeds will be donated to Planned Parenthood.

Sunday, October 28th | (Real) POLITICS 101 is a workshop by You Matter Nation that reveals systems and procedures that drive democracy which are often obscured from the view of the very people it's meant to serve.

Friday, October 26th at 8PM
SOAPBOX: SPEAK UP, SPEAK OUT!

FREE EVENT
(with $10 Suggested Donation to the ACLU)

A soapbox style performance roster featuring Pamela Sneed, Adrienne Truscott and a lineup of powerful women and gender non-conforming artists. A PROTEST presentation of song, spoken word, readings, poetry, and presence. All proceeds of the event will be donated to the American Civil Liberties Union.

The Cave, a VR Experience

FREE EVENT on Friday, October 26th | 7PM to 8PM in the Downstairs Lobby
and available again after Soapbox: Speak Up, Speak Out! 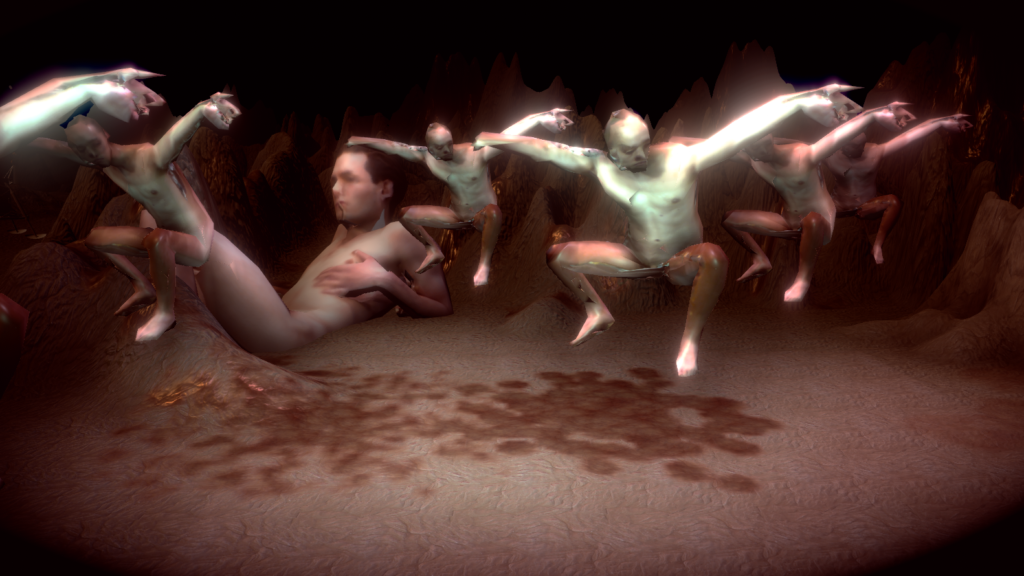 Explore the Plato’s cave of shadows and immerse yourself in a world of eternal Ideas.

“The Cave” is a multiplayer VR HTC Vive experience where the spectactors travel together through a world inspired by Alain Badiou's “Plato’s Republic” - an unique translation of the ancient philosopher’s pivotal work.

In this era of post-truth politics the allegorical Cave becomes an enormous virtual theater in which Plato's prisoners become spectator-prisoners of the contemporary sphere of media. More information at https://dreamadoptionsociety.com/

OCTOBER 27TH POST-SHOW DISCUSSION:
George Emilio Sanchez and Karen Finley will discuss the performance on October 27th after the show, all audience is invited to attend! 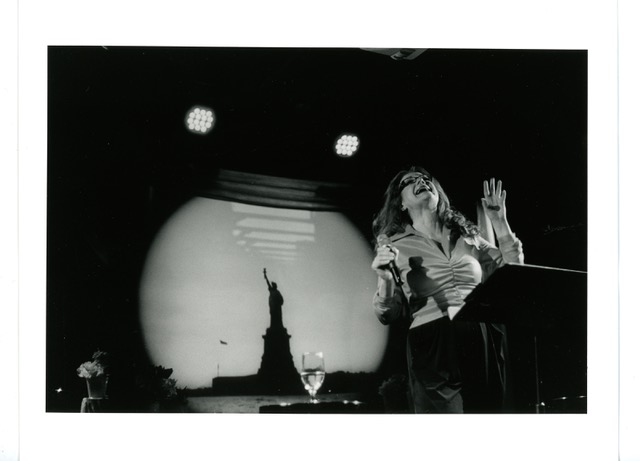 Grabbing Pussy: In this impassioned poetic monologue, celebrated performance artist Karen Finley stands as a voice for the embodied rage that refuses to endure the authority and terror of bodies controlled -- whether objectified, legislated, policed, desired or violated by force, racism and sexism. Finley employs elevated experimental language to delve into the use of language itself as a weapon to inflame and shame. Haunting vintage film montages and timelapse projections symbolically envision going places and the memories of getting places. The Political is Personal.

Parts Known: In this new work, Finley responds to the anguish of forced family separations at borders, and the suicides of New Yorkers Anthony Bourdain and Kate Spade, while invoking her own challenges following her father’s suicide as she explores the “left and abandoned” children. Through the complexity, struggle, vulnerability and strength of the psyche, Finley searches for inspiration in our history of individuals living through difficult times and making a difference. What does that search mean for us here, together? The resistance of not giving up, of moving forward with the experience of others before us and their examples of activism of the past. In this testament is our collective histories. We as a people have the wisdom -- we know how to resist, transform and move forward. The Personal is Political.

Both works expand on Finley’s career-long pursuit of performatively articulating the injustices committed by the U.S. government and society at large -- an undertaking spanning her commentary on the rise of HIV and AIDS in the 80s (We Keep Our Victims Ready), her acting as plaintiff in National Endowment for the Arts v. Finley after the NEA vetoed her grant in 1990, and her criticism of homophobia (The Father In All of Us). These narratives, and many more across her body of work, position underrepresented voices and struggles as an always central component to her practice -- a commitment as crucial as ever in today’s precarious political landscape. Performance Photo by Dona Ann McAdams

“Karen Finley is a profound theater-artist. Her artistry is due in part to her ability to alchemize ‘news’ and make it art ... She is irreplaceable.”
— Hilton Als

“Wildly zig-zagging oxymoronical burlesque about how we all desire that which we can never have.”
—Theater Times

“Finley finds her ultimate target in the current president. Unsparing diatribes serving as an implicit rebuttal of the ‘kill ’em with kindness’ approach.”
—Kirkus 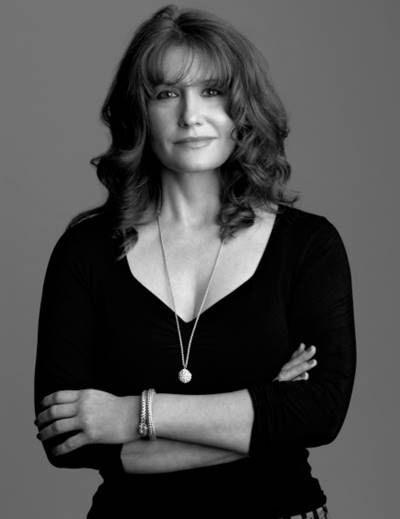 ABOUT THE ARTIST
Karen Finley is a performance artist whose work has long provoked controversy and debate. She has received numerous awards, including a Guggenheim Fellowship, two Obies, two Bessies, and a Ms. Magazine Woman of the Year Award. This performance coincides with a release of her new book, Grabbing Pussy, available October 23, 2018.

FREE Event in The Downstairs

A Care Cafe is a place, for people to gather their wits, thoughts and comrades in action. It’s a momentary community that offers space and time to reflect and respond to world events, form connections, formulate action and enact care.

This Sunday’s Midterm Care Café is a chance for us to come together and think about how to care for ourselves, each other and our country and an opportunity to take action to help win back our Democracy. Drop in any time between 12pm and 2pm and share info on how to help get out the vote, write postcards to potential voters or just sit and talk under a banner of care.

The Care Cafe was conceived by artist Lois Weaver, whose practice uses the familiar to get people to talk about the unfamiliar. Some of her formats include the Long Table, Porch Sittings and the Situation Room. In response to these difficult times, Lois is proposing the Care Cafe as a call to conversation and conversation as a call to action. 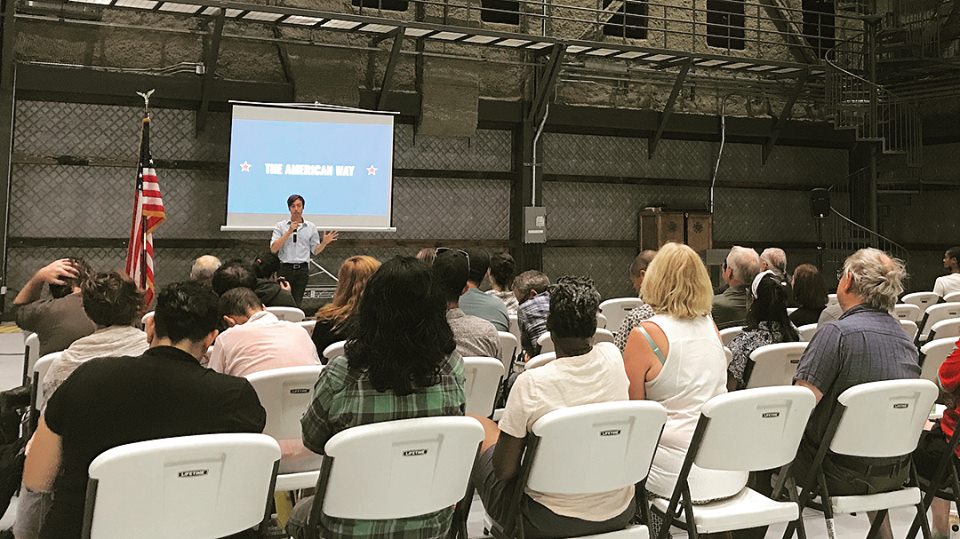 (Real) POLITICS 101: The systems and procedures that drive democracy are often obscured from the view from the very people it's meant to serve. This workshop opens up these topics, and others, which are ignored by political science classes, the media and even Wikipedia pages. It covers topics such as: political geography, the Party Structure in America, and how to engage in the existing system for real effect. Runtime: 1.5 hours

Started after the 2016 Presidential election, You Matter Nation was created by seasoned activists and political leaders to combat the negative and hate filled rhetoric overtaking American politics. With workshops and civic actions, YMN gives regular Americans the tools they need to take on sustainable and efficient actions to fix our broken political system.

ABOUT THE ARTIST
Benjamin Yee was a fundraiser and Digital Director for Barack Obama in 2008. He later worked for the NY State Senate’s CIO’s office and good government think tank Reinvent Albany. Politically, Ben has served at every level of the Young Democrats, including VP of the Young Democrats of America. Ben is the founder of ShiftSpark, an online tool for Citizen Lobbying. He is also Secretary of the NY County Democratic Party and State Committeeman for NY’s 66th Assembly District.

La MaMa is a member of First Amendment Sanctuary Spaces, a network of arts and cultural spaces dedicated to the preservation, practice, and legacy of upholding and supporting all the rights guaranteed by the First Amendment of the U.S. Constitution.