Friday and Saturday at 7PM; Sunday at 1PM 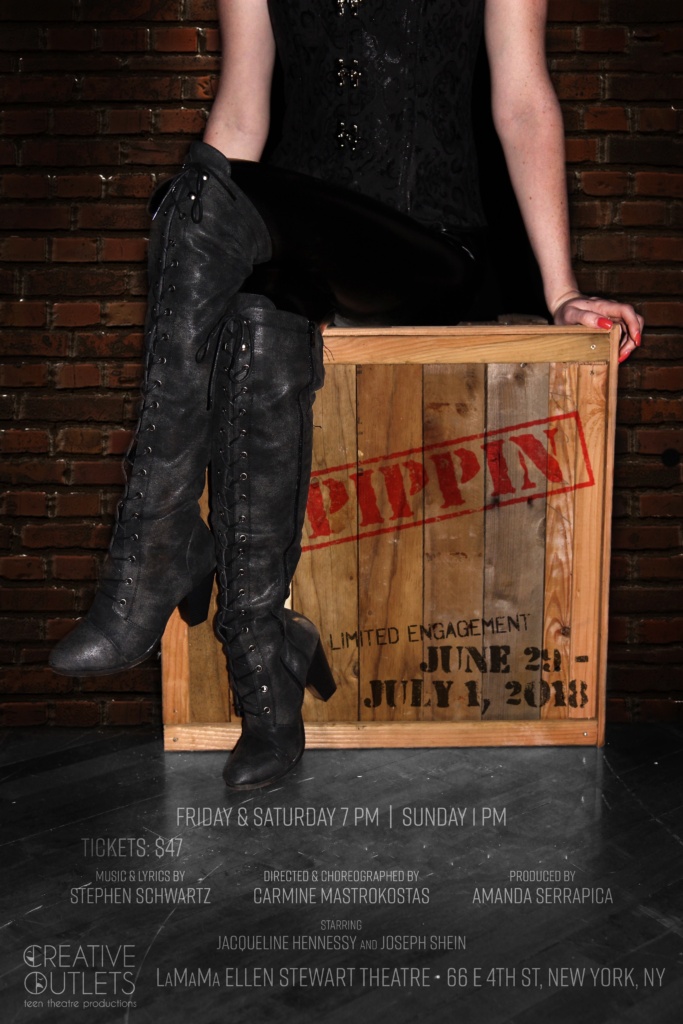 There's magic to do when a young man learns the true meaning of glory, love and war in Stephen Schwartz's iconic and foot-tapping musical masterpiece. This Tony Award-winning musical, now directed and choreographed by Carmine Mastrokostas and produced by Amanda Serrapica — has been re-imagined as a tight-knit travel theatre troupe with a female ringleader — who break into a warehouse for the ultimate one night only performance. This unforgettable new production will lift you up and leave you smiling, but be careful because you may never know if you are their next target.

Carmine Mastrokostas (Director, Choreographer, Set and Costume Designer)
Carmine, a graduate of the Ranney School and entering NYU TISCH this fall,  kicked off his directing career with Runaways, at the Axelrod Theatre in Deal, New Jersey. He recently directed Into the Woods at the Baruch Performing Arts Center this past August. Carmine is a Count Basie Award winner who studies at the 2016 Tony Award recipient for Best Regional Theatre, The Paper Mill Playhouse. As a performer, his screen credits include Spiderman Turn Off The Dark PSA commercials and the Macy's Thanksgiving Day Parade. Carmine's theatre credits include five performances at Carnegie Hall with the New York Pops, Broadway on Broadway in Times Square with Phantom of the Opera, Paper Mill Playhouse, pilot shows with MTI, and many more. Some of his favorite roles are Jimmy (Thoroughly Modern Millie), Billy Crocker (Anything Goes), and Lumiere (Beauty and the Beast).

Amanda Serrapica (Producer, Production Stage Manager, and Prop Master)
Amanda, a graduate of the Ranney School is entering her freshman year at Muhlenberg College this fall, after graduating from Ranney School in May. As a fourth grader, she became interested in theatre when she performed in the musical, but found in years to come that she preferred being behind the scenes. Amanda first became a member of the stage crew in eighth grade, and has since become that stage manager for all Ranney productions, starting in her freshman year. Specifically, she stage manages the lower, middle, and upper school shows, which all come to a total of four plays Amanda assists with every academic year. Her previous production of Runaways at the Axelrod Theatre was her associative producing and production stage managing premiere. She continued to produce and stage manage for Creative Outlets' production of Into the Woods this past August.

Robert Rutt (Technical Director and Lighting Designer)
This is Robert’s 20th year in professional theatre and tours. Robert has worked extensively in all aspects of technical theatre, with experience as a Production Manager, Set/Lighting Designer for community and education institutions such as Axelrod Performing Arts Center, Princeton University, The College of NJ and Brookdale Community College.  Robert also works with Music Men Productions, producing design and technical needs for such venues including Algonquin Arts, Shakespeare 70 at the Kelsey Theatre, Monmouth University, St. George Theatre (NY), to name a few.  Robert has a BA from Ramapo College of NJ in Technical Theatre/Set, Lighting Design. He has had the honor of being nominated for several awards, including Perry Award Nominations for Best Lighting Design for "The Diary of Anne Frank" and "Into the Woods" as well as Basie Awards Nominations for "Once On This Island", "Always A Bridesmaid",  and "Charlotte’s Web". Robert was honored with this year's Basie Award for Best Lighting Design for a Musical for “In The Heights." Robert would like to thank everyone who supports him in every new adventure and looks forward to continuing his mentoring and teaching of future designers.

Joe Moffitt (Music Director and Conductor)
Joe is a multi-instrumentalist, composer, teacher, and music director based in the NJ/NYC area. His journey in music began with Western classical piano music, along with playing hymns and songs in church. His practice has since grown to include a wide range of instruments and traditions. Some of these include Yoruba and Malinke folk music of West Africa, Indian classical, and Native American song and chant. He is also involved in local theater, along with directing acapella groups and various choirs. He currently serves as music director at The Church of the Precious Blood in Monmouth Beach, NJ and mentors and teaches local youth in music performance, song composition, production, and recording.

Abigail Granata (Graphic and Web Design)
Also graduating from the Ranney School, Abby is an aspiring graphic designer with a plethora of talents in the fields of logo design, web design, video editing, and more who will continue her studies of design at Baylor University this fall. Additionally, she has a personal connection to Creative Outlets as she enjoys acting herself; Abby has appeared in various musical productions at her school from a very young age and has competed and received awards in multiple forensics competitions. Just as the rest of the members of the team, she is thrilled to be sharing her passions for design, leadership, and performing with fellow teens and the local community.

Vincent DeSeno is grateful to be a part of the Pippin team as lighting assistant and spot light operator. He is a rising junior studying Mathematics at Fordham University. Before college, Vincent graduated from the acting program at the Freehold Performing Arts Center. While there, Vincent had the opportunity to sing at the Grand Ole Opry, The White House, Carnegie Hall, and more. Now in college, Vincent has shifted his focus to education and activism. His projects include creating and organizing the event “LGBTQ+ Make Out at Trump Tower,” which gained the attention of NowThis, FCKH8, and more in February of 2017. Vincent now works as a tutor with The America Reads and Counts Challenge, and runs an educational STEM Club for children.

Margaret Garrity is the assistant lighting designer. Margaret is thrilled and incredibly humbled to be a part of Creative Outlets’ production of Pippin as a part of their design team. Margaret will be working on her degree as a lighting designer starting this fall at Pace University.

Creative Outlets: Teen Theatre Productions is non-profit production company that strives to allow all high schoolers a chance to become leaders in the arts. It affords new opportunities to passionate high school students who excel in the arts to take on leadership roles in a professional, quality theatrical setting. Creative Outlets presents all student-run productions in which participating young artists learn and explore their stagecraft. Students can not only perform—they can direct, choreograph, produce, design sets and costumes, and more.  We create unique theater for teens.