Gallery Hours: Thursday to Sunday 1 to 7PM, or by appointment

Claudia Doring-Baez’s recent paintings depart from the French director Alain Renais’s 1961 film Last Year at Marienbad, with its enigmatic screenplay by Alain Robbe-Grillet. Doring-Baez’s engagement with this icon of Nouvelle Vague cinema follows her series inspired by Cindy Sherman’s Film Stills and Marcel Proust’s In Search of Lost Time. Last Year at Marienbad evokes an encounter between a man and woman who may or may not have met before, overseen by a third man, told through a dream-like blurring of fact and fiction. Doring-Baez knows the film well and has done extensive research into it, even exploring an obscure Argentine novel whose fundamental idea seems related to Robbe-Grillet’s. Her paintings are based on stills from the film, chosen as essential to its emotional affect and elusive narrative. Doring-Baez filters the stills’ images through her own recollections and translates them into a non-literal language of broad painterly gestures.

Using selected images from Last Year in Marienbad as starting point distances Doring-Baez from actuality, both because of the fiction of cinema and because of the intermediary stage of the stills. This double remove seems liberating, allowing her to treat key images from the film – a bedroom scene, a characteristic gesture of the woman, a view from a balcony – without concern for fidelity to actual appearances. She exaggerates the compression inherent in her photographic sources, plays with scale and spatial relationships, simplifies and stylizes, and sometimes transforms black and white into raucous color. In one large painting, she combines figures almost irrationally, like an old fashioned (pre-Nouvelle Vague) movie poster. Just as the film ignores conventional narrative logic, Doring-Baez ignores the sequence of the film, making us invent new connecting narratives when we see her Last Year at Marienbad paintings as a group. We recognize elements from the film – topiary trees, the protagonists disappearing down a corridor – but ultimately, our attention is held by Doring-Baez’s bold drawing, her energetic paint handling, and, in her strongest works, her heightening of the strangeness of remembered but familiar images – at least to fans of French cinema. 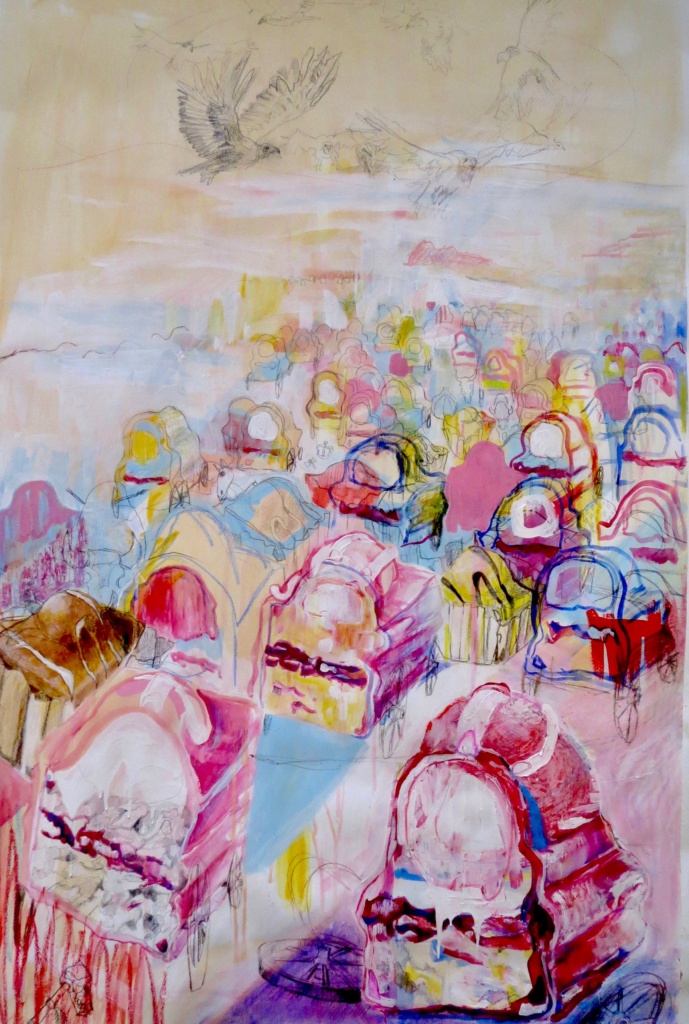 In this exhibition multimedia artist Sophie Iremonger presents six works on paper and an installation of sculptural pieces. The former are highlights from a series thematically concerned with ‘unstoppable desire’. The latter are her ‘Cake Relics’—found books which the artist has transformed with painterly substances into dessert-like objects.

Iremonger’s sizeable works on paper feature vivid colour, multifarious pictorial languages and seductive yet cautionary imagery. Saccharine foods, sexy-cum- shifty aristocrats and bejewelled objects are haunted by glimpses of skull-like visages, birds of prey, faceless nude musicians and coffins, filled with cake. Strong formal links to Abstract Expressionism—and its descendant forms of highly-charged gestural painting—blend in her hands with Pop-Art incisiveness and a unifying yet delicate handling of line. Excerpts from the artist’s sketchbooks further reveal the psychological and idiosyncratic nature of this line in its most raw state.

The sculptural works focus more singularly on a food theme. Stodgy-looking volumes of thick media mound around isolated confectionery images which appear to sink into remnant traces of the underlying book forms. Here a curious balance between the appetizing and the inedible meets with rich and layered visual puns, while evoking a checkered human history in which books have all too often been destroyed en masse or ‘sweetened’ with editing,incurring great loss of meaning.

Claudia Doring-Baez was born in Mexico City, Mexico, and has lived in New York since coming to the city in 1980 to attend Columbia University, where she obtained a B.A. She has an M.F.A. from the New York Studio School. Baez has exhibited at Art-3, Brooklyn (now Silas Morisse Gallery); Galería Emma Molina, Monterrey, Mexico; and Lehman College Art Gallery, Bronx, New York.

Born in Ireland in 1983, Sophie Iremonger studied painting at the National College of Art and Design in Dublin. In 2008 she moved to Germany and now calls Berlin home. Of her creative habits, she says:

I’m a maid of all trades; an illustrator, painter, writer… I pull on many disciplines for the efficient processing of external and internal junk. In my visual work I fuse a deep appreciation for the drawing skills of the Old Masters with contemporary image-making techniques, layers of texture and supernatural hues. Power, Evolution, Sex, Death, Englishness, Puddings, Prehistory, Witches, Menial Labour, Stately Homes, Nature and Landscape are key themes that I find myself consistently working with.

Also an author, Sophie has written several books, including: ‘Big Wind in Little Crangle-Knocker’—a book for children of all ages concerning a giant pair of buttocks in a tree (for which she also created the illustrations); ‘When Is It My Turn To Poop?’—the tale of a boss who steals his employee’s toilets; and ‘Cookery For The Unemployed: time consuming recipes for the useless eater’—a limited edition cookbook which will be available for purchase during the exhibition.

Founded in 1984, La MaMa La Galleria is a nonprofit gallery committed to nurturing artistic experimentation. La Galleria serves its neighborhood as a venue that encourages an active dialogue between the visual arts, new media, performance, curatorial and educational projects. Its focus is to offer programming that reaches beyond the expectations of traditional gallery and institutional exhibition-making, to a diverse and intergenerational audience. And as a non-profit, La Galleria is able to provide artists and curators with unique exhibition opportunities that are largely out of reach in a commercial gallery setting.